The National Aeronautic and Space Administration (NASA) is readying for an ultra-precise atomic clock that could not only transform the navigation of deep space missions, it could also improve the accuracy of GPS timing and thus GPS positioning. It is expected to launch in June. 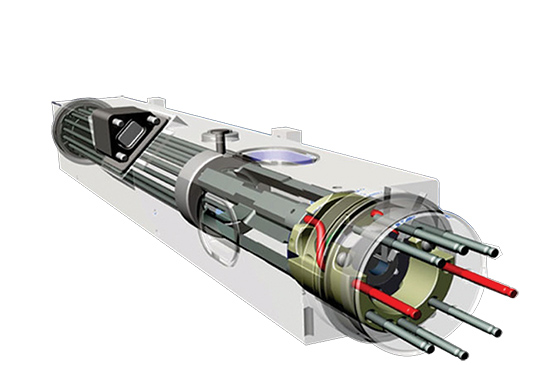 Drawing of the DSAC mercury-ion trap showing the traps and the titanium vacuum tube that confine the ions. The quadrupole trap is where the hyper-fine transition is optically measured and the multipole trap is where the ions are “interrogated” by a microwave signal via a waveguide from the quartz oscillator. (Image: NASA.)

The Deep Space Atomic Clock (DSAC) is a very small (the size of a toaster) mercury-ion atomic clock that is as stable as a highly precise ground atomic clock, yet small enough to fly aboard a spacecraft, and rugged enough to operate in deep space. Current ground-based atomic clocks that locate and navigate deep space missions are too massive to fly in space themselves.

Thus, tracking data from the far-flung spacecraft must be collected and processed on Earth, meaning a two-way tracking link. DSAC will enable NASA to improve tracking data precision by an order of magnitude for its deep space missions out to Jupiter, Saturn — and beyond.

It could also be used to improve the accuracy of GPS. DSAC is more stable and accurate than the atomic clocks currently aboard GPS satellites. As system modernization proceeds, use of a DSAC aboard future satellites holds out many promises. DSAC technology uses the property of mercury ions’ hyperfine transition frequency at 40.50 GHz to steer the frequency output of a quartz oscillator to a near-constant value.

The clock confines the mercury ions with electric fields in a trap and protects them by applying magnetic fields and shielding. It is anticipated that DSAC would produce only 1 microsecond of error over 10 years.

For further details on NASA’s Deep Space Atomic Clock project and detailed callouts on the diagram above, look here.